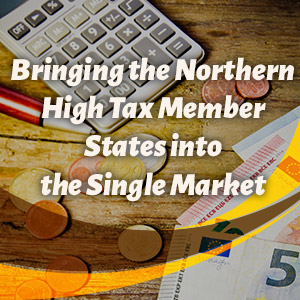 This report from 2004 called the Northern High Tax Member States to moderate their excise duty level on beer.

It is apparent that very high rates of excise for alcoholic drinks are incompatible with the single market. The single market is the cornerstone of European economic prosperity and there is no justification for making significant exceptions to this merely to accommodate the taxation policies of a few Member States.

Out of a total of 25 Member States, only five accounting for less than 20% of the population of the EU, are attempting to persuade the remaining 20 Member States to adopt high tax policies. Those five Member States account for about 70% of the beer excise collected in the 15 Member States before Enlargement. The UK alone accounts for above 40% of that total. High taxation of beer, wine and spirits is inconsistent with the traditions of most of Europe and always brings with it substantial fraudulent activity.

The current EU legislation discriminates against beer by compelling Member States to impose a minimum excise rate on beer and distorting competition in favour of wine. The Commission has recently opened an infringement proceeding against Sweden for allegedly applying excise rates that distort this competitive relationship though in this case the Commission claims the distortion favours beer sales. The fundamental principle is that European tax legislation should itself be fair and not discriminatory.

The Brewers of Europe call upon all Member States to support measures designed to improve the working of the single market and to moderate their taxation policies in order to reflect a rational response to competitive forces. The reduction of high excise rates is an inevitability. The high taxing Member States should recognise this and act quickly.