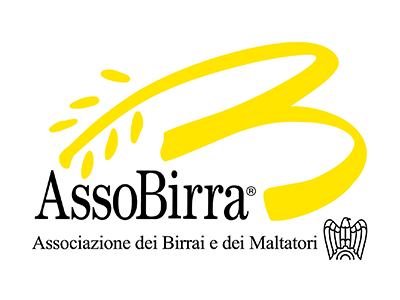 AssoBirra, the association of beer and malt makers, represents the main beer and malt producing companies in Italy. It is affiliated to Confindustria, Federalimentare, BOE (The Brewers of Europe), Euromalt and EBC /European Brewery Convention)

AssoBirra performs institutional duties and promotes technological development, beer culture and responsible consumption. This mission is carried out through the conduction of studies and researches on quality and technological innovation of productive processes and through pr campaigns aimed at promoting a greater knowledge of beer and a culture of responsible consumption of alcoholic beverages

May join ASSOBIRRA as their actual members of the industrial companies that carry out the predominant production and import of beer or malt production in Italy - with an organization and head office in the national territory - as well as companies with different legal head offices, who have in any case national branches and / or branch subsidiaries and / or branches.

They may also join ASSOBIRRA, as aggregated partners, other business realities, who do not have the requirements to be classified as a. actual members but have elements of complementarity, instrumentality and economic link with institutionally represented entrepreneurship. Their number must not in any case distort the representative qualification of the Association.

There isn’t an application fee to be paid to become a member but our Rules of Procedures determines the follow details for the contribution:

a) each brewery shall be required to pay an annual ordinary contribution calculated on the beer volumes expressed in Hlg.Plato, which is given for consumption and sold in Italy in the calendar year preceding the approval of the final balance sheet of AssoBirra as follow:

b) each beer-producing company in Italy over 135,000 Hlg.Plato is required to pay a contribution on a proportional basis to beer volumes expressed in Hlg.Plato in addition to the annual subsidy referred to in (a) above sold and sold in Italy in the calendar year prior to the approval of AssoBirra